The first meeting of the new writing group will be this Friday morning. I met up with Emily, who is running it with me, and we went through a framework, which we will hold very lightly.
The librarian told me there has been a lot of interest and if everyone turns up, there simply will not be enough room..what a delicious 'problem'. I have so many ideas for 'prompts' ..enough for a writing group every day. Even more ideas flooded in during this mornings 'Morning Pages.'
November is National Novel Writing Month, auspicious timing, and I also noticed a pink piece of paper on the notice board telling us about a Poem for Perranporth competition, so I might use that to get the juices flowing next month.
Posted by Zannie Rose at 03:22 No comments:

Write in the moment

life has been pretty hectic for a few weeks. I have left the big city and am now living in a very small seaside village. There is a city 9 miles away and I bumped into someone who lives locally when I was in the library there. It seemed we were both interested in finding a creative writing group. The nearest one is miles away, and not handy if you do not have a car. I asked at the local library about the possibilities of me starting up a creative writing group. The librarian was very helpful..it starts next month.
Posted by Zannie Rose at 02:25 No comments:

I enjoyed a day doing shamanic journeys . I  regularly do journeys for other people so it was great to take a whole day to focus on myself. We were asked to bring a book and pens to write notes. I thought this would be to record journeys, so took my art journal with me as well as my pastels so I could depict the experiences in different ways. I also thought we would have an hour to pass at lunch time, and thought itwould be a great use of my time to get my colours out.
As it turned out, writing was actually needed and lunch time was filled with talking about the morning's experiences and my pastels reminaed in the box. It did not matter, the day was very rich & colourful and it has expanded my art journal as it now has writing in it too and I may paint over the notes or add pictures as the fancy takes me. 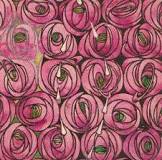 I had an adventure  this weekend which included a visit to 78 Derngate which is dedicated to the work of
Charles Rennie Mackintosh. I was introduced to his work many years ago and quite like his style. In February  I was in the Cotwolds at a singing weekend and at the same venue was a gaggle of
Charles Rennie Mackintosh afficianados who were there to listen to lectures about him for 2 days.
I thought at the time that there must be a lot to know about him and his work if it filled 2 days and 2 evenings.
Over the weekend I popped in to see a Mystery Tales exhibition, which did not live up to the promise of its title. The work on show made me think that I could do that. The difference between us is that he did it and I have yet to create anything mysterious on paper that would actually be good enough to put on public display.
Whilst in the buidling that housed Mystery Tales I also went to see other things on show and was not really surprised to see Lakshmi as part of a small , busy piece of work that looked as if it had once been part of a wall in a temple.
She is showing up all over the place now I have a focus on her and am exploring her in a concentrated manner.
I did some drawings while I was there too. I think the invitation to draw something to show 'The World is at my Feet ' was aimed at children , but I drew 2 feet and the planet and pinned it to the board.
I may not have been able to walk up Yoko's step ladder, but I could participate in this..and it was fun.
Posted by Zannie Rose at 01:02 No comments:

I am off to a small market town  tomorrow as I have been invited to a birthday BBQ by a 3 year old whose birthday it is. I had been moodling about a birthday gift. What do you get for a little girl who has tons of toys and books already? As I have been enjoying my oil pastels this week I thought she might enjoy her own set of quality oil pastels. The texture and colour choices would make a change from chubby wax crayons or felt tips.
I decided to go to CASS which has an interesting collection of art supplies.
En route I popped in to Oxfam, and there I got my 2nd 'find' in a week....a small porcelain tea-plate with Lakshmi in the centre.
Lakshmi has been around a lot recently. I went to a Psychic Cluedo event as Lakshmi, and won a prize for my presentation, then at an experimental creativity evening I was invited to be Lakshmi again, and here is the plate, waiting for me.Sheer delight.

This is the image in the centre of the plate and next week I plan to paint her. Her essence began to come through when we did some painting at the Creativity evening and I think even more would like to be expressed. And yes, I did get some pastels 50 pieces with 49 colours.I hope they go down well. 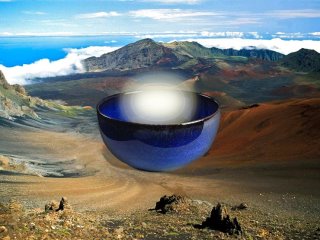 I popped into a charity shop this morning, and guess what was waiting for me? An Indigo Bowl.

I have been using the Indigo Bowl Ho'oponopono cleaning tool quite a lot this month, so it was a delight to see it there , just for me, demonstraing what you focus on you get more of.

I bought it and now plan to draw the Heleakala volcano ( in Hawaii) and place the Indigo Bowl on that, and then write 'stuff' on pieces of paper and put them in the bowl. This will clean all the data that led to conflicts and constrictions etc .

I have decided to use pastels to draw the volcano initially and it will probably be on white paper.

What a fun project for the next couple of days, and I wonder how long it will take to fill up the bowl with slips of paper?

The Heleakala volcano is in the Heleakala National Park and there is an Artist's Residency programme , open to weavers, story tellers, hula halau, literary artists, musicians, oli, mele, and visual artists . What a wonderful opporunity to spend several weeks in such an uplifting natural environment. I wonder when I will get an opportunity to visit myself?

I went to see 'To the Light' at the Serpentine Gallery today. It is an exhibition of some of Yoko Ono's work. I was thrilled to see the step ladder, magnifying glass and piece of paper on the ceiling that I had read about. John Lennon had been to an exhibition, climbed the ladder and saw the word written on the small piece of card was 'yes' . He said if it had been 'no' he would have known Yoko was not the woman for him. I so wanted to climb that step ladder this morning, but checked in with the young man in black who was standing in the corner. I asked him -''if I go up that ladder will you have to stop me? '' and he said yes, I so wish he had said no!!!.
There's the difference between John and me..he would never have thought to ask if it was OK..but then, he already was John Lennon so no-one would have stopped him would they. Have I made obedience an art I wonder.
Posted by Zannie Rose at 07:04 No comments: